Thoughts on creating events that exhilarate

Jukebox hero; setting the right mood at events is critical, so here’s how to create the perfect playlist by Richard Carlstrom

Among the many elements that go into creating a successful event, music may seem less important to some yet it’s actually tantamount to creating the perfect event. People consistently respond powerfully to music (often without even realizing it) and here’s where being the maestro makes all the difference.

Scientific psychologists like David Huron have posited that “music contributes to social cohesion and increases the effectiveness of group action.” Think about how work and war songs, lullabies, and national anthems have brought families and nations together and you’ll realize how music is the “social cement” in myriad experiences. What people hear influences how they feel.

With this in mind—and because our own experience has shown this to be true, time after time—here are some of the most important considerations about music at events to take into account.

Setting the emotional toneFirst and foremost is creating the music that attendees will hear while entering and exiting the ballroom or theatre. Music triggers the emotions for your audience from the get-go and conveys a strong message about what to expect from the day ahead.

Like lighting, color, signage, and stage design, the musical “score” will help your audience get into the mood; the frame of mind you want them to have. Typically, you want an upbeat, excited, optimistic and cheerful one, of course, but whatever attitude and mind-set you want your audience to be in, we put a lot of thought into ensuring you make it happen with the right music.

Yet, if we polled attendees post-event about what they heard, they likely won’t remember everything that was on the playlist. What they’ll remember is the overall mood and the ideas and new thinking it supported. They will remember how the music made them feel. The response to music is subconscious yet it’s a powerful influence, nonetheless.

Best mixtape ever
A customized soundtrack is extremely important in triggering the desired response. Stock music can sound like it was slapped together unthinkingly. Even worse, it can feel manipulative and commercial, inducing attendees to tune out. 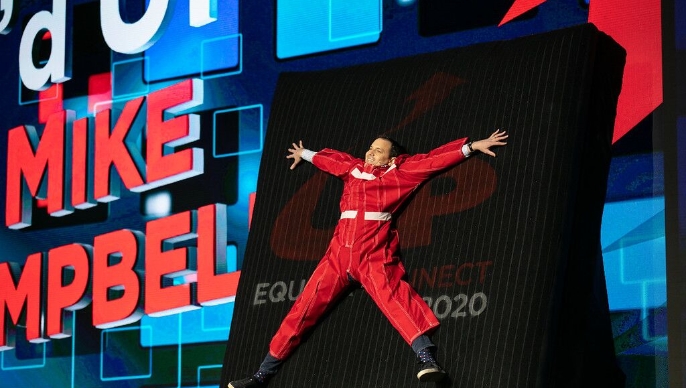 When we’re curating music, we take your audience’s demographics and the tone of your business into consideration. We aim to disrupt expectations, just as we do in every other aspect of event production, so that your audience passionately engages in a compelling, unique experience they’ll remember.

Let’s say, for example, that we’re curating primarily pop music or rock music for an event. We might play a contemporary hit followed by something 30 years old, such as The B-52s’ “Roam”. Even young people will respond to the mix because they think, I’ve heard this before. I’m not sure where, but I like it.

Some attendees will hear a song they haven’t heard in a while and fall in love with it all over again, evoking the sensation of being in sync with the time and place. Some will have no idea why they are inspired—they just know they are.

And like everything else that goes into event production, it’s important to curate a bespoke music score that doesn’t sound like a radio station or an arbitrary Spotify playlist, riding in an elevator or zoning out at the mall. When your audience leaves humming a tune or moving to the music, they take the context of the event with them. For them, you’ve made it “Easy” (like The Commodores’ hit of 1977! Or “Easy as ABC”, as The Jackson 5 claimed in 1970. . . . We could go on and on!

For more ideas on how to curate the right soundtrack and music for your audience, talk to us.

Got a million ideas? Or none at all? No matter, because the real genius is in our collaboration. So let’s create something astonishing together. Leave a message here or call us now at (866) 984-8766.